Over the weekend, I attended the Diabetes Expo, which was presented by Diabetes Victoria. Initially I was a little bit unsure about some of the invited speakers but I decided to head along with an open mind; a piece of advice I would recommend for any diabetes-related event you attend.

During the day, separate sessions for people with type 1 diabetes and people with type 2 diabetes ran at the same time with exception to men’s and women’s health topic. There was also a trade display where diabetes technology, allied health organisations and other fun stuff were showcased. Oddly though, the program didn’t include a lunch break, which meant that we had to miss out on a session or two if we wanted to grab a bite or browse the trade display.

As expected, I went through an array of reactions and emotions as I live tweeted from the sessions I sat in on. There was inspiration, horror, laughter and moments of facepalming or vigorous cheering.

Inspiration was listening to the wide range of research that is happening in Victoria, which will be funded through the Diabetes Australia Research Program. While research towards ‘the cure’ is always necessary, it is great to see projects that aim to help people who currently live with diabetes too.

Horror was listening to birth defects and complications in pregnancy that women with diabetes face if our HbA1c is not in target range. I would have preferred to be empowered through hearing women with diabetes overcome their challenges during pregnancy, rather than be faced with scare tactics.

Laughter was listening to an associate professor without diabetes describe his experiences from wearing an insulin pump and CGM for 24 hours. Questions of “where do I put my pump” and “where is that sound coming from” are all too real.

Moments of facepalm included the close loop system being described as a way to reverse type 1 diabetes. It was also disappointing that the role of genetics in type 2 wasn’t brought up, perhaps providing false hope that type 2 diabetes is ‘reversible’ for all. It also perpetuates the stigma that diabetes is purely related to lifestyle factors. 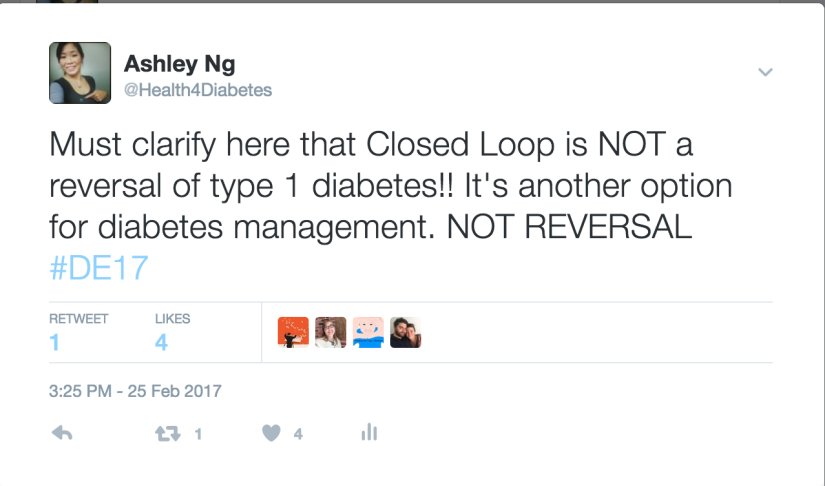 Moment of vigorous cheering was this response to an audience member who brought up changing the name of diabetes to reduce stigma. By insisting that a name change of type 1 diabetes occurs, we’re further stigmatising people with type 2 diabetes. We’re essentially saying to them “you smell, we don’t want to have anything to do with you”. Rather than “let’s stand up to the bullies together”. No. 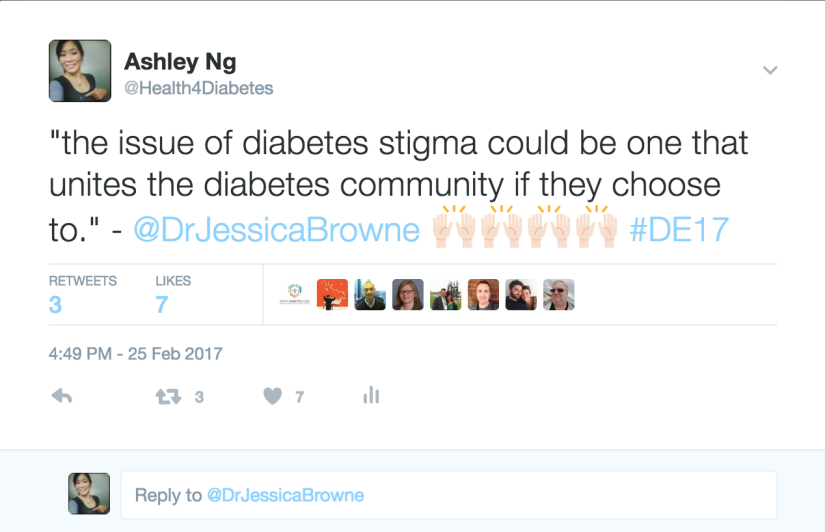 In general, I thought the day was a great success. I understand it must have been tough to tailor topics to such a diverse audience. Most importantly, it was great to see the presence of consumers, diabetes organisation, healthcare professionals and industry in the same place. Let’s hope for more collaboration between these groups and future events in the future!

Things are a bit rough and uncertain at the moment. Everyone is a little stressed and on edge. Our world needs a little more laughter and silliness. Nature carries on around us, surrounding us with its beauty and elegance. Reminding us that this too shall pass, just look up and find the light. 💫
Laptop down, snoozing @sadface.xena, @masterchefau on Tele watching Aunty @pohlingyeow stress everyone out. Relishing these little moments. 🥑
The only thing making this crazy time bearable. 🐱 How are you guys doing? 🌈 #stayhome #catsofinstagram #LTUWFH
These are crazy times. The past week has been filled with anxiety, stress and exhaustion. It took me surprisingly longer than I had expected to ease into working from home full time and finding ways to beat cabin fever. Daily exercise has been a necessity and fresh air is always welcomed. I’m taking this opportunity to breathe, slow down and focus on the important things in life. 🌷
Solid and timely reminder today to stop rushing and breathe. I’d pulled my pump site out overnight unknowingly (why would you knowingly pull it out...). Also slept ON my pump for who knows how long and now my back feels funny. Woke up a bit late, put a fresh site in and thought I could quickly do a line change. In my flurry and multi-tasking state I dropped my vial and it cracked 😫 . . . Slow down. Breathe. The world will always be there. You are one person. Give every task the attention it deserves. You deserve clarity and peace. 💆🏻‍♀️
Thanks @mrkellar for the podcast @ologies recommendation! I was a bit hesitant and filled with a bit of dread listening to a #diabetes podcast. I think it’s the cynic in me after seeing and hearing lots of misinformation in the media about diabetes. 🙈 . . . Thankfully @allieward and @mike.natter absolutely nails the discussion, facts and evidence around all types of diabetes. I love how Mike dispels myths and misinformation around type 2 diabetes and @allieward addressing body confidence and weight loss in diabetes management and diet culture. 🙌🏻 . . . Love the honest conversation and very practical information shared. Can’t wait to check out the rest of the podcast episodes! (Also I did yell out in the car “It was Stacey!!”) (Also yes, the drive home took me that long. Actually even long because I only put the podcast on about 20 minutes into my drive home...)🚘 . . . #diabetes #podcast #academicchat
The stars almost aligned for me to have a naked shower. My sensor died after 15 days and I was due for a pump site change the next day. Perfect 👌🏻 . . . Until I got changed for bed and accidentally ripped my pump site out. This meant having to do a site change that night and no naked shower the next day 😑 . . . The frustration is real. 🙃#MakesSenseIfYouHaveDiabetes #Diabetes #CGM @mylifediabetescare #YpsoPump #Dexcom #HalfRobot
Meet Xena, our little warrior princess. 🐱 #catsofinstagram