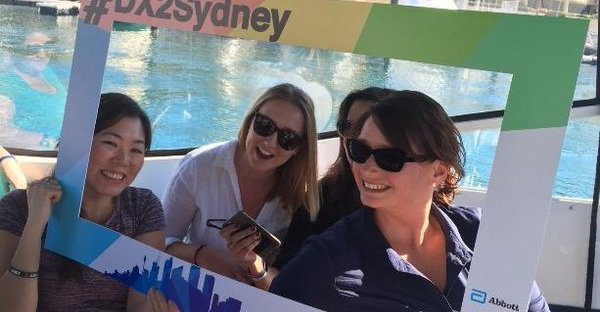 Leading up to the event, I hadn’t had much time to think too much about it. When I met up with Georgie from Lazy Pancreas, I started to get excited.

I met Georgie along with many other inspiring people with diabetes and people working in the diabetes industry at the very first Australian Diabetes Social Media Summit in 2012. Since then, some of these people have become very close friends of mine. Being reminded of them got me really looking forward to what DX2 Sydney could bring aside from awesome new diabetes technology.

The event exceeded my expectations and I was blown away and humbled by the discussions held, the knowledge learned and the technology being presented before us. We had a presentation from Udo Hoss who played a key role in the development of the Libre sensors. He spoke about how the underlying chemistry behind the Libre sensor and the nerd in me loved it. Not to mention we had amazing weather during our time in Sydney and tucked away in a in a heritage listed building turned hotel on the wharf.

One of the bloggers mentioned that it was nice to have the focus turned on themselves once in a while. And I would have to agree. In the past few months I have dedicated 80% of my time to my PhD and the Young Leaders. So it was extremely refreshing and relaxing to hang out with a bunch of people and talk about anything and everything from diabetes to Australian culture and sport.

Meeting new people, putting names to faces or twitter handles and catching up with friends is always fun. I thoroughly enjoyed hearing different perspectives and experiences on living with diabetes. And it was mind blowing to get a glimpse of what goes in with product development with diabetes technology. I can’t wait till what the Diabetes Exchange program has planned next!

*While Abbott Diabetes Care covered the cost of my attendance at DX2 Sydney (including flights, accommodation, food etc.), they certainly did not pay for me to write these words. They also provided all attendees with a Freestyle Libre reader and two sensors to trial…

…oh wait… were you expecting this post to be a review of the Freestyle Libre? Well, you’re just going to have to wait till my next post perhaps. In the meantime, perhaps some of the other attendees may have written something on it here or may even be taking part in DBlog week 2016 this week! These amazing people are: