I had the pleasure of receiving from Vicroads a few days ago that my license would be suspended if I don’t provide an up to date optometrist report within 28 days. ‘WHAT?!’ was indeed my first reaction. I had only just sent away a diabetes report a few weeks prior from my GP who stated that the only medical condition I’ve got is diabetes and so it was unnecessary for her to check my eye sight – exactly what we did the last time. Clearly it wasn’t enough this time round.

But that prompted me to follow it up with a phone call to my optometrist as I noticed my stock of contacts are ridiculously low as well. I asked when the last time I paid them a visit was and it was indeed over 6 months ago (oops). Without a second thought, I blamed it on not getting a reminder in the mail to make an appointment as they usually send them out close to when I was due in, which was two months ago apparently. Although part of me was wondering if I had somehow accidentally chucked it out without opening it up thinking it was spam. haha (double oops).

Not that I have booked in for an appointment this sat, I’ve got to wait for the optometrists to tell the reception ladies to book me in for a retinopathy check due to diabetes. The last time they found some old scarring in one of my eyes so I was due in to see if that had progressed anyway. Definitely not looking forward to the painful eyedrops and walking around in sunnies indoors looking like I’ve had a massive Friday night out and nursing a hangover. Anyway, the point I was trying to make was our reliance on getting reminders via mail; email; text. It’s such a handy thing!

A week or a few days before my hair appointments, dentist visits, diabetes clinics visit, I always receive a text confirming my attendance and reminding me of it as well. A few times I have admittedly forgotten and even rearranged a new appointment via text. As this era becomes more tech savy, it seems that we rely on them just a little too much sometimes. I know my dad has missed appointments because his dentist didn’t text him a reminder. But I also have at times received messages from my family members while we were in the same house! Ludicrous!

Firstly, with the heavy use of technology, it’s no wonder our generation is becoming heavier and lazier!

Secondly,  I constantly worry about a scenario where there’s a technical meltdown. How would people cope without it? Would life be at a standstill? A close friend of mine recently reignited my spark for send cards in the mail after a brief stint in the hospital. She sent me a lovely card she wrote and we have since been exchanging cards. It’s such a simple pleasure some of these kids will never know! Also what about the feeling of ripping out a day’s page from the diary once it has passed? (or crossing out for those who aren’t as extreme or whose diaries will fall apart if you ripped a page from it lol) I worked with a guy whose highlight of his day (one of many I’m sure) is to be able to cross out the day on the office calendar as we leave work for the day. His face absolutely lit up and it seemed to have a significance of leaving the day behind you as you leave the office. Once, the manager crossed it out by accident and he was visibly grumpy (oops!).

I guess aside from all these technologies taking over our lives, it’s always nice to appreciate simple things in life. Don’t take anything for granted! 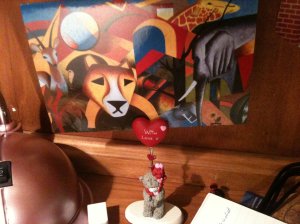 Life has been pretty hectic. There are times where I’ve wondered if we’ve made the right choice to have kids; where I miss life before them. Then there are so many moments when I can’t imagine life any other way.
12 weeks watching you grow and learn as you take everything around you in. Your smiles and happy babbles are worth the sleep deprivation and getting spewed on ❤️
Happy Fathers Day to all the papa’s and father-figures out there.
In Chinese tradition, we usually celebrate or announce a baby’s arrival after 30 days. The family would send out parcels with red eggs and cakes.
The pinnacle of maternity leave - sitting in the corner of a cafe with great food, coffee and baby cuddles.
👣 six weeks 👣
Sunset walks 🌅
Our winter sunflower 🌻